The Humble Indie Bundle is a promotion concept where you can by a bundle of games from independent developers, at a price that you choose.
The current campaign is #2 and contains five games:
I have purchased the set, and so far only tried Machinarium, but I must say that this game is worth at least $20 alone.
It is a fairly regular adventure game with an atmosphere much like Syberia. You control a robot that has an unknown task. For some reason the robot reminds me a little of the animated movie 9. 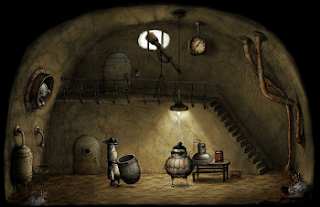 The hint system is a really nice touch. It is essentially a mini shooter game, but the idea is that it takes a little time before you can get the hint, so you are more likely to try to figure it out rather than just look it up.
The implementation is entirely flash, which I can imagine is nice for the graphical artists, but it does have small subtle bugs, such as items becoming un-clickable, so you must move around to re-activate them.
But overall the game is challenging and has a cool atmosphere, which I find are the two most attractive features.
If you have not already bought the Humble Indie Bundle, you need to hurry, as there is now less than 5 days till the offer expires!
Indsendt af Kenneth kl. 12:54 PM